skip to main | skip to sidebar

Apologies to all of you who have landed here. I'm here.

People on Blogger who don't allow anonymous messages don't have the option for me to put a direct link on my comments. It has to come through this old blog first.

I hope you'll click on the link above. Or this one at the end of the next sentence. It's easy to remember: http://dancingwithfrogs.com

Apologies to people who are sick of seeing this, but I've moved to here.

Pop over and have a look at what's been happening.
Posted by Frogdancer at 1:02 PM No comments: Links to this post

I know this is the third time I've told people I've moved, but apparently some people slip through the cracks with blogs moving during the holidays...

Come and see what's been going on.
Posted by Frogdancer at 2:48 PM No comments: Links to this post

Just in case you missed it...

Apparently some people reading this through feeds may miss the big announcement that I've moved.

http://dancingwithfrogs.com is where I live now. Come and see what's been happening. I've missed you.
Posted by Frogdancer at 9:08 AM No comments: Links to this post

I know it's been a few days since I posted, but I've been really busy. Moving.

Yes. Frogdancer has now moved across to here.

I'm now a dot com! Not bad for a technophobe.

http://dancingwithfrogs.com for those of you who want to update your blogrolls before jumping over. There may be a few organised souls out there like that... who knows?

For the rest of us, come straight in. There's a Welcome mat at the front door I put there especially for you. See you over there.
Posted by Frogdancer at 9:10 AM No comments: Links to this post

Yes, it's that time of the week again. Skinflint Sunday, where I share the ways I stretch a dollar until it cries for mercy. This weeks suggestion is a corker. I've talked about it obliquely in a post a day or two ago. It's easily done, and the benefits to your sanity and of course your wallet are many.

Get rid of half your family.

I have four kids, so that means that I've rehoused two. What a saving. I'm not sure I want them to come back....

(Only kidding. I'm relatively fond of them, seeing as how they're relatives and all. Plus the fact that I've made very few humans in my life, if you take into account 4 vs 4 billion. So I'm a bit curious to see how they turn out, so I want to keep them under my eye.)

But by gum! The money stays in your wallet a lot more when there's only half the amount of bodies to feed, entertain and clothe. Jack and Jordan have been gone for 7 days. There's a truckload of food right there that I didn't have to find. Cha-ching! (That's supposed to be like a cash register. Work with me here....)

Pimple cream, shampoo, deodorant, hair gel and computer use more than halved. Cha-ching! No arguments, so the money that I was going to need to put aside to send me to the mental home is suddenly able to be used elsewhere. Woo Hoo! Let's go to the movies!!!!

An aside here... I rarely take my boys to the movies. It costs around $60 to get all of us seated in the cinema, which is a lot of money for a couple of hours entertainment. So unless it's Harry Potter (Family Tradition is to see each movie on the first day of release... I don't care how much it costs. Same with Star Wars, but at least they're not making them anymore), ...........what was I saying? Oh yeah. So unless it's something really really good then we just don't go. We go to Bali or Phuket instead and buy the dvds for $1. There's another priceless Skinflint Sunday tip for you right there. I have over 100 movies sitting in my room that I haven't yet watched. Imagine all the money I saved by going overseas with all the boys to get these films. Sometimes I amaze even myself with my financial expertise.

But with only TWO kids (I made Brennan scrooch down at the ticket box so there wouldn't be any debate about his 'child' status. He's taller than me, so I wasn't taking any chances. 13 is still a child ticket, isn't it?) then a trip to the movies to see "I am Legend" was only around $35. There's $25 saved right there! Cha-ching! We took chips bought at Aldi, so there was about $20 saved from not buying the rip-off food at the cinema shop. Cha-ching!

Brennan was desperate to see this film, and I really wanted to as well, so we went on Tight-arse Tuesday to see it. (T.A.T is called that because tickets are cheaper on Tuesdays, so all of the ....um... frugal people with very unsaggy bottoms choose to go to the movies on this day.) I was so rapt when Brennan turned to me in the car going home and said, "Mum, that was the best movie I've ever seen." I loved it too, so if you haven't yet seen it, it's worth a look.

But movies aren't the only bargain you can get when you only have to cater for half your family. Takeaway is suddenly instantly affordable. Normally when we get fish and chips the boys are only allowed to get a minimum chips and either a dim sim or potato cake each. But this time.......... we were able to go all out and I lavished them with an abundance of minimum chips and a piece of flake each. The luxury!! We felt like we were living in Toorak. Can't go cha-ching, because technically we didn't save money. But nice it was.

Oh. I went a bit Yoda then. Must've been the Star Wars reference above.

So get rid of half your family. I'm not saying permanently. That would be wrong. But think of Hansel and Gretel. They found their way back home eventually, and think of all the money that their father and evil stepmother saved at the supermarket while they were gone. Someone else fed them while they were in the woods, so it was all good. Jack and Jordan are being fed by their father and they're working in a fruit shop that also sells lollies and chips for the week, so I'm sure they'll come back just like Hansel and Gretel: bigger, fatter and pimplier.

It worked for me. I'm sure it could work for you too.
Posted by Frogdancer at 2:14 PM 11 comments: Links to this post

It doesn't take much to make me deliriously happy. 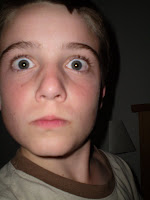 This is the look I got yesterday when I asked Brennan and Connor to do all of the housework before they went to their Dad's for the weekend. This is the look I got when I told them that they'd get $15 each if they did all the housework before they went to their Dad's for the weekend.

*happy sigh* Pure bliss.
Posted by Frogdancer at 7:59 AM 6 comments: Links to this post 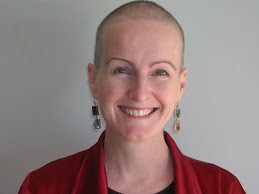 Frogdancer
Melbourne, Australia
Sorry for shouting, but CLICK ON THE WEB PAGE LINK AT THE LEFT TO BE SENT TO MY CURRENT SITE!!! It seems odd to start off by saying I'm a mother of 4 boys ... (surely in this day and age I'm somehow MORE than that???) but of course being a mother to my terrific kids underpins everything else in my life. My boys are at that wonderful stage where they are independent but still under parental control (19, 17, 16 and 14) and we're a tight little unit. I've been divorced for 14 years, and we live in the suburbs, slowly renovating our little weatherboard house and garden. I'm a secondary teacher, at the same school my older kids attend. Being allergic to Maths, I gravitated to English and Drama teaching, which are of course the funnerest subjects of all. I discovered an interest in living more simply because of financial constraints. Somehow living on one wage with the tribe doesn't allow for the champagne lifestyle I'd always dreamed about! My main motivation is to save $$, but at the same time it's lovely that this means we're reducing our impact on the earth.

Why I use Bloglines...